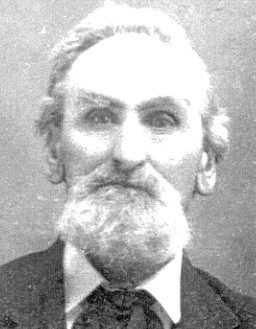 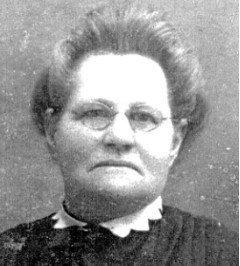 Alice STAMP ABBOT: Oh, they lived in so many different places. They farmed here, there, and yonder. They were in Kansas, Iowa, Wisconsin, Minnesota, and Nebraska.

Aunt Louville was the oldest child in the family; Aunt Amelia was number two and Momma [Gertrude] three; Walter was the baby. Momma was born in Nebraska. I don’t think they owned any property in Nebraska, they were probably homesteading it and when it didn’t pay they moved to another location. If they had a hailstorm that cut the crops all to pieces or they had a drought then they would move on.

Grandpa repaired boots and shoes you know. He was a boot and shoe maker. That was his profession, he just farmed on the side.

Momma said he would go to town to buy stuff and come home drunk. He would just turn the horses loose and the girls would have to go out and take the horses down to the creek some place or take them into the barn and then go down to the creek and carry the water up to water the horses. …Because he was too drunk to do it.

So one time Grandpa took the wagon and went to town. Some other men went along with him and of course they got a bottle of whiskey too. On the way coming home, why, the horses ran away. Grandpa fell out and struck his head on a rock alongside of the road.

When Grandma and Grandpa CAMPBELL moved out to Houlton [now part of St. Helens], when they came out west, Walter was four years old (1887). They drove out here with a horse and wagon you know.

Grandma said, “OK, you can go back if you want to but I’m staying here.” She bought five acres, that five acre tract led clear down to Milton Creek, just this side of the railroad at Houlton. That was Grandma’s property, and Momma helped her build the kitchen and the pantry on the back of the house. Grandma fed section crews in order to pay for that property. So that was her home, it wasn’t Grandpa’s.

Aunt Louville was the midwife when I was born [Alice May Stamp, born 18 March 1895 in Washougal (WA). (The STAMP’s also lived at Nahcotta and later moved to Estacada, OR.)]

Grandma’s room was so sparsely furnished you know, they had just what they needed to get along. They used their dining room for a bedroom so they had the dresser sitting in that far corner of the living room. In the center was one of these little old fashioned square center tables with a lamp on it and I think, you know they used to have conch shells for decoration, well, she had one of those, and two or three just plain area dining chairs. That’s all she had in that room.

The thing that fascinated me about that house was that she had the bedroom papered with newspaper. You could lay in bed and look at the pictures and the writing on the wall.

After Grandma refused to move Grandpa decided he would build a little shack out there and put up his shoe repair shop.

He could swear like a trooper. He would be fixing shoes and he would get mad at something that didn’t go just right and he would slam that down and cuss until the air was blue. If either Aunt Ville or Aunt Amelia was there they would quarrel with him, but Momma wouldn’t. One day she was out there and he had one of these spasms and he said to her, ” A hell of a lot of good it does to talk to you, go on to the house.” Poor Grandpa.

Oh, when we went to Grandma’s…, Oh…, several times when we went up there…, Momma would take the kids and go up to Grandma’s…, of course Aunt Ville and the whole bunch of them believed in this and Grandpa was always going up to St. Helens to hunt up something… There was supposed to be some gold or something hidden up there and people were always hunting for that. But anyway…, they would get the Ouija boards out. I’ll never forget it until my dying day. I was just a little kid you know. And by golly, you would hear knocking here, there, and yonder down the hallway and on the floor. I would be sitting on a plain old dining chair with my feet on the floor and hear this rapping right underneath my shoes. It just scared me pink ! I would curl up in the chair, pull my feet up so I wouldn’t hear anymore of it. They did that by the hour. I don’t know whether they ever got anyplace or not but anyhow they seemed to get a kick out of doing it.

As Grandpa grew older he began to have these terrific headaches. He was of the old fashioned kind, “Oh, those damned doctors didn’t know anything.” That’s the way he expressed it, and he wouldn’t go to a doctor to find out what was wrong, what was causing these headaches. He got worse, and Momma went up to visit them. She said she was there about an hour or so, she was talking to them and he seemed to know who she was and all about it when suddenly he said to her, ” Oh, you live down on the coast ? Well, I have a daughter living down there, maybe you know her ?” Momma said, ” You don’t know how funny that made me feel !”

Whenever he had those spells Grandma was always, “that damn woman”. Grandma told us he had an old revolver that he kept under his pillow. I said, ” Grandma, I should think you would be afraid to sleep in the same bed with him. She said the pistol wouldn’t work, parts of it were missing. I said, “Yeah, but he could hit you over the head with it !” But she wasn’t afraid of him.

Mother said…, she went up on the “T. J. Potter” [sternwheeler] and got them, to bring them down to where we lived at Nahcotta and while they were sitting in the cabin on the boat at the end of the double row of seats through the center, why there was a big mirror there, and Grandpa had been looking in there and finally he began to chuckle. Momma said, “What’s funny, Poppa ?” And he said, “That’s a hell of a looking old cruster in there.” And he was looking at himself in the mirror!

Well, they were down to the beach to visit us about a year before he died and they had been there a few days and Momma said to us children, “Go tell Grandpa to come in, it’s time for lunch.” He was sitting out on the back step and he said, “No, he wasn’t going in as long as that damn woman was in there!” Now, one of those spells had come over him, you see. So we went in and told Mother. She said,”That’s all right, I’ll go talk to him.” So she went out after a little bit and she said, “Well Poppa, aren’t you hungry ? It’s time to eat, come on in.” He came in and had lunch then.

But he wandered around and we kids would follow him so we could see where he was going, so he wouldn’t get away too far. He would come in and tell us about the rolling prairie out there, it was wonderful looking land. He thought he had walked for miles but it was probably 3 or 4 blocks away. He just had no idea about true distance or anything.

Grandma worried about getting him home then, being Momma wasn’t going back with them. Loyed at that time was a brakeman on the railroad and he said, “I’ll get him on the boat all right. I’ll just pick up the suitcase and he’ll think I’m going off with their possessions and he will follow me !”

One time he had one of these spells at Houlton, of course he was always looking for a new place to move but he would get confused. So he got to the railroad track and he walked down to Scappoose and the authorities picked him up down there. They took him to Salem.

When he went to the asylum they gave him a physical right away. They said there was a splinter of bone pressing against the base of his brain. He must have splintered his skull when he got drunk and fell out of the wagon over in Nebraska. You see, they could have had that splinter removed years ago and he wouldn’t have had those terrific headaches or lost his mind either. Of course he only lived maybe a year before he passed away.

Addenda: Jacob died on 27 April 1911 and is buried at the Lee Mission Cemetery in Salem, OR (State Mental Institution).

Rachel died 13 Nov 1923 while living with her daughter Gertrude at Estacada. She is buried next to Gertrude and Philip Stamp at the Philip Linn Pioneer Cemetery.